Situational leadership: getting the best from a coaching approach 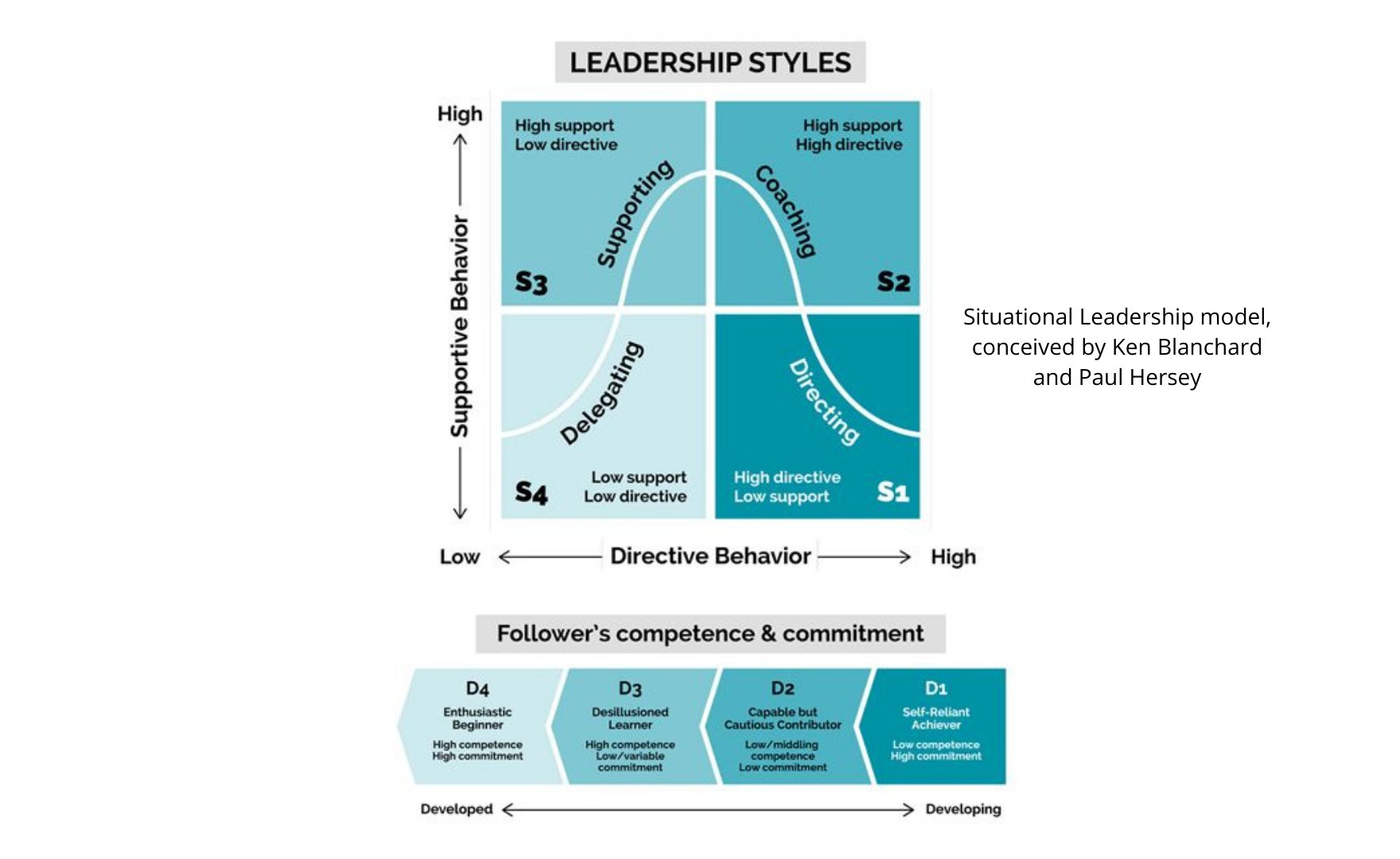 In the fresh flush of enthusiasm, after initial coach training, and bursting with a new suite of skills, coaches will coach anything that moves. They’ll coach their friends, their kids, even have a go at coaching their partner! This can sometimes work but most of the time, does not end well. Right? No surprises there. The saying that ‘to the man who with a hammer, everything looks like a nail’ is probably appropriate. Needless to say, the coaching approach is not the answer in every situation, whether you are a professional coach or a leader using coaching skills to develop your team. There is a time and a place and I want to set out a quick guide as to where it works best.

Then there are situations where coaching is particularly appropriate. In coach training, I often use the Situational Leadership model, conceived by Ken Blanchard and Paul Hersey, (image above) as a guide for leaders in knowing when to coach. I know of no person or leader who goes through their day with a steady supply of models or approaches being called to their stream of consciousness, but if you can embed the essence of this, it may prove helpful.

It’s logical that, in an emergency, where action needs to be taken quickly or when something needs to be explained to an inexperienced colleague looking to you for a clear explanation or when decisive action needs to be taken by someone with the authority to do it, a coaching approach just doesn’t fit. Similarly, whenever we are working with peers and discussing something that needs to be explored and thought through, a coaching approach would be ill fitting and perhaps even a little weird. Something different is needed.

Where the coaching approach really packs a punch is in the development of team members from early dependency to self-sufficiency and maturity. We all know we create habitual ways of doing things: the manager who likes to give orders, the manager who sucks up all responsibility to his or herself, the manager who derives reward from being the person who knows. The result is that the person who reports to them develops a mirror behaviour of not taking decisions, not developing independent thought and fear of making a mistake. This is where the manager needs to learn to flex, and the deployment of a coaching style and an ‘ask-don’t tell’ approach works well.

And then, lest that too become a habit, it needs to move on from that to become a more collaborative or indeed delegative approach where complete trust is placed in others to get things done. Coaching is not the panacea to everything. But it is a significant skill that can change relationships, ensure the transition of employees from being told what to do and being dependent, full of fear and unwilling to make a decision, through thoughtful consideration, choice making, trial and error to collaboration, collegiality and self-sufficiency. When leaders move from a high emphasis on ‘tell’ to ‘let them get on with it’ too quickly, that can also end badly. The coaching approach is a vital link in personal development.

In her book, ‘Brilliant Coaching’, Julie Starr identifies five key elements that the coaching leader must learn to use with skill. These core skills that form part of the discipline of the coaching practice are applicable in many situations, used skilfully and individually. She identifies them as:

This is something that most of us do not too well. Usually, when we are listening, or think we are listening to people, what we are actually doing is waiting for our turn to speak. When we lay down that urge, and actually listen, it is highly transformative. It is transformative not just for us, but for the person being listened to. It is highly likely that this might be the first time that they will have been really listened to. We begin to hear and pay attention to things previously unnoticed.

Ed Schein, in his book, 'Humble Inquiry - The Gentle Art of Asking Instead of Telling', states that, “Don’t we all know how to ask questions? Of course, we think we know how to ask, but we fail to notice how often even our questions are just another form of telling - rhetorical or just testing whether what we think is right. We are biased toward telling instead of asking because we live in a pragmatic, problem-solving culture in which knowing things and telling others what we know is valued.” When we ask questions, in the spirit of genuine enquiry, we open up communication, build trust and lay the foundation for real collaboration.

Some of us thrive off it, some of us hate it. It is often used as an excuse to share one’s disapproval, preference or opinion with the unsuspecting. Used skilfully and prioritising the benefit of the other, however, it is a developmental gift. I still can remember some of the most helpful and useful feedback given to me over the years, by colleagues who had my best interests at heart.

This underpins most of what is good about great leadership, coaching, collegiality and healthy workplaces. We are all human and naturally wired to connect and to be connected with. When we start to treat people as units of output or the material of plans, tasks and strategies, something is lost. It is important to remind ourselves that our colleagues are our equals, irrespective of title or status, origin or gender, beliefs or preferences. When we view them as such, how we relate to them undergoes a shift.

One size does not fit all. In our interactions, we can choose between waiting and acting, speaking and listening, directing and inviting, enquiring and advocating, deciding and exploring. The choice of when we do what reflects our skill, our intelligence, as a colleague, as a leader, or as coach.

The leader who learns to use these five behaviours well, will see their effect multiply and reverberate for the benefit of all who come into contact with them.